What an original day this turned out to be!  For our stop in Tuscany on this day we decided to do something that none of us had ever done before – a Wine Tasting Tour!…and…in TUSCANY!!  Does is get any better than that??  We don’t think so!!

Ok, I’ll get to that in a second, but first I have to tell you about the “adventure” we had that morning.  Since our Tuscan wine tour didn’t depart until the afternoon, we decided that we had just enough time to get in a little “road trip” to Pisa.  Now, my Mum really wasn’t too into this idea due to the fact that we were “winging it” (no organized tour – too chaotic for her), but Dad was all for it, so Mum happily took the opportunity for some quiet time on the sun deck while we ventured on our trek with no set itinerary.

I should say that we normally don’t recommend travelling the Italian ports on your own due to the inconsistency of the transit system (they often take prolonged breaks and go on random strikes, and you CAN’T be late when you’re cruising!), but, we decided to make an exception with this one because Pisa is relatively close to port compared to the other stops.  We also didn’t want to spend the extra money on the organized tour to Pisa because….well….there’s not that much to it, really.  We warned Dad that it was going to be quite a journey for what you get at the end, but he didn’t care, so off we went!

On one of many buses to/from Pisa! 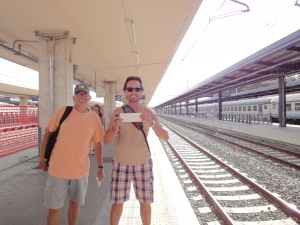 Have ticket - will travel! 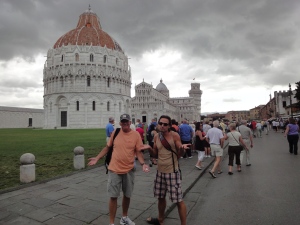 Dad’s reaction was as we predicted – it’s the same as most travellers experience when they arrive in sight of the famous monument – it’s kind of like: “Is this it”??  Yup.  That’s it.  Now, don’t get us wrong, it’s still an amazing display of architecture and history, and highly recommended on any bucket list, but it can be somewhat underwhelming when you see it.  It’s a lot smaller than you expect, and it’s a lot less to see than you expect, as there is not much else to the site other than the three structures.  So, unless you feel like taking the hours to wait in the endless lineups to go inside, it takes you about 10 minutes total to take the obligatory “I’ll hold up the Leaning Tower” photo, and then you’re done.  So we did.  Natch. 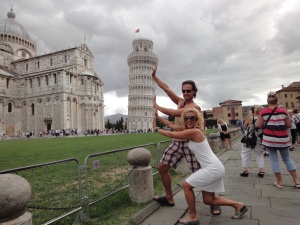 The wine tour that followed in the afternoon was such a glorious and relaxing treat.  The travel through the Tuscan countryside was breathtaking.  Rows and rows of grapes, olive trees, and my favourite – sunflowers.  Sigh.  I could have stayed forever.

The Vineyard was a beautiful and serene little farm that has been active for generations, and we had quite a history lesson of the farm, along with a tour of the owners’ private cellars.  We also were treated to an incredible education on all things involved with local wine & production in Italy, including growing, harvest, fermentation, and food pairing.

After the tour came the part we were all salivating for – the tasting.  After our busy day of sight-seeing, learning, and touring, nothing could have ended it better than a toast (or 10) with family on a Tuscan countryside.  Highly recommended in every way. 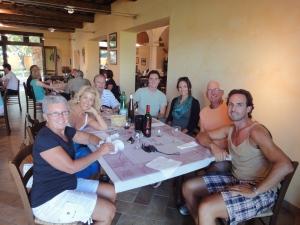